Button Text
Our members are as diverse as the collections they build. The Close-Up is published every 4-8
weeks and takes a look at one members' collection as well as the person and stories behind it. 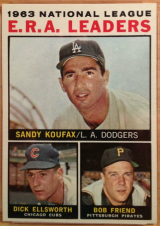 Mark Clatterbuck
What got you collecting as a kid? What was the hot thing to collect then?
I had a few sports cards as a kid and found out one of my friends, another classmate, and a kid
down the street collected cards.  The year was 1979 and I lived for sports back then, so it seemed
natural to start collecting cards.  The classmate was the son of the pharmacist at the local drug
store where I ended up buying the boxes of cards.  The kid down the street collected anything
football, especially Minnesota Vikings as his uncle played for the Vikings in the 60’s.

The hot thing at the time was Mantle cards.

What’s the most destructive thing you’ve ever done with a collectible?
The most destructive thing I did was just general handling early on; looking at the stats on the back,
reading the bios and/or cartoons, etc.  I never put cards in my bicycle tires or played flipping games
with them.  I tried to take care of my cards.  However, we had a black lab mix that chewed up a 1979 Rod Carew and Jim Palmer.
I was devastated and remember calling my mom all pissed off that our dog Lizzy Lou chewed up Rod Carew.

What’s the one thing you sold or gave away that you really regret and wish you could get back and why did
you let it go?
Sometime in the 90’s while in Wichita, Kansas, I bought a stunning looking 1954 Bowman Mickey Mantle for $700 at a card show.
I was proud of my new purchase and showed it to a dealer I had been buying from since my early teenage years.  He took one
look at it and thought it was trimmed.  The person I bought it from appeared at another show and I asked for my money back.  He
was unable or not willing to refund my money, but was willing to work out a trade.  He had nothing I really wanted, but I settled for
some Star basketball cards and 89 Score football cards that amounted to $700 at the time.  I have since sold all but one of the
cards I got in the trade at greatly reduced prices.  Looking back, I wish I would have just kept the Mantle that was a bit short top to
bottom.

What’s the one thing you own now that you wouldn’t sell for all the money in the world and what’s the story
behind it?
I cannot see ever getting rid of my 1948 Leaf Joe DiMaggio in vg or vgex condition.  My aunt, an antique dealer in Springfield, MA
(she lives in Amherst) sent me a Joe DiMaggio autograph for Christmas in 1979 after learning I began collecting cards.  So naturally,
I had to have a card to go along with the autograph.  Sometime in 1980, the Extravaganza (big flea market in Veterans Auditorium
in Des Moines, IA) came to town and I purchased the DiMaggio for $60.

The Chance has the same image as the T-206 with a glossy finish applied to the surface making for very vibrant colors.  The other
neat thing about the card is it pictures Chance in his Cubs uniform with the listed team being Los Angeles, and was printed in New
Orleans.  So the uniform is of a major league team, the team listed is a PCL team, and it was printed in a city having a team in the
Southern Association.

What do you have the hardest time with as far as your collection goes?
Paying the premium for graded cards.  I started collecting high grade cards before third party grading existed and feel I am pretty
good at it for 50’s through 80’s cards.  While I have branched out into pre-war cards in lesser grades, I am still amazed by 50’s and
60’s cards that survived in nmmt condition or better.  Paying 2 to 3 times book value or more is difficult because I feel I am paying
for a service that I do not need nor always agree with.  I like physically seeing what I buy, so the benefit of “knowing what I am getting”
through third party grading on purchases through eBay or other auctions has never been a big deal to me.

Do you have any short or long term collecting goals or do you just buy what you like with no real rhyme
or reason?
I am a sucker for things that catch my eye.  If it speaks to me, I tend to buy it even if it is something I do not currently collect.  However,
I do have a goal of having at least one card of those players that were part of the inaugural Hall Of Fame class (Ty Cobb, Christy
Mathewson, Babe Ruth, Honus Wagner, and Walter Johnson).  Christy Mathewson and Walter Johnson are the remaining players
missing from my collection.

What’s the best interaction/story you have (if any) about a pro athlete you have met?
Most experiences with pro athletes have been poor and none particularly memorable.  However, it was interesting hearing from Gale
Sayers why he chose the University of Kansas when he was from Omaha Nebraska.  His answer was the University of Nebraska at
the time was not good and Kansas had a good football program.  How times have changed.

What is your favorite sports moment you have witnessed (doesn’t have to be in the flesh)?
The University of Kansas basketball team (Danny and the Miracles) winning the 1988 NCAA Basketball title.  I was a student with a
single dorm room and a 13” Sony Trinitron color TV in 1988.  A large portion of the floor I lived on was in my dorm room watching the
game against Oklahoma who beat KU twice during the regular season.  We won and the entire student population rushed outside
and partied.  There were no classes the next day.

Through the years, how have your views on your collection and collecting in general changed?
Until 1989, I bought a set each year of all the major card companies.  I stopped when Upper Deck, the sixth major card company,
came out.  I was never really about sets.  I was more into getting cards of what I referred to as the icons of sport such as Mickey
Mantle, Willie Mays, Hank Aaron, Ted Williams, etc.

When the hobby became big time in the mid-80’s, I transitioned to primarily football cards.  I was more of a football fan and the cards
were less expensive.  I was just starting college and saved money from allowances, birthday, and Christmas to buy cards.  My father
did not allow me to have a job until I was 17, so I could no longer afford $500 or more for the Mickey Mantle cards I was paying $60
for only a year or two before.

Now, I struggle buying high grade cards graded by a third party requiring the expenditure of dollars for a service I do not need or
appreciate.  However, I have branched out into photography and some pre-war cards which I never really saw growing up in Des
Moines, Iowa and then living a number of years in Wichita, Kansas.