Contact Us
Our members are as diverse as the collections they build. The Close-Up is published every 4-8
weeks and takes a look at one members' collection as well as the person and stories behind it. 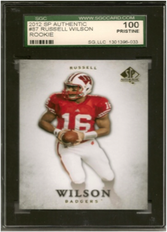 Les Bretthauer
What got you collecting as a kid? What was the hot thing to collect then?
The people that read this that are not from the Seattle area may not understand life growing up in
this area in the 1950’s, but here goes..

Growing up in Seattle’s Rainier Valley in the 1950’s and 60’s, the big deal was the wonderful world
of Unlimited Hydroplane Racing.  I recall buying baseball cards at the local drug store in 1958 and
1959 and had the star cards of Mantle and Mays but I was not much of a collector. You have to
remember that there were no major sports teams of any type, just the lowly Seattle Rainiers Minor
League Baseball Team. I remember watching Big League baseball on TV with my dad but did not
realize how special those players were until later in life. In our minds, these players and teams lived
in some far away land that did not mean much to us.

In the early 1960’s, the University of Washington Huskies Football Team  started winning and next thing you know, they were playing
the big boys in the Rose Bowl. We finally had a football team worth our time.

The superstars of our youth were the hydro drivers. Bill Muncey, Bill Cantrell, Mira Slovak, Jack Regis, Lou Fageol, Joe Taggert,
Ron Musson, etc.  Meeting one of those fellows was like meeting Babe Ruth or Joe Dimaggio.  As a button collector, the big three
were Shanty 1, Hawaii Kai III and The Pink Gale (Gale 4).  The hated rivals were any boat from Detroit. Citizens of Seattle had no
use for Detroit, period.
What’s the most destructive thing you’ve ever done with/to a collectible?
I do not recall being destructive with my collectables although I was not to happy when I returned from the military to find that my mother
had given all my baseball cards  and dinky toys to my younger cousin. Prior to my military service, I had sold all my hydroplane buttons
to fellow collector and club member Bob Senior.

What’s the one thing you sold or gave away that you really regret and wish you could get back?
I really got into Baseball Card, Basketball Card and Football Card collecting after my son was born in 1974.  I read an article in the local
paper in 77 or 78 about Andy Stagg’s Card Shop in Kent.  I gathered my son and daughter and headed to his little shop inside the Meeker
Mall.  Two reasons, give mama a break from the kids and check out the baseball cards of days gone by.  That was the beginning of my
serious card collecting.  During that time, I became quite a collector of basketball cards.  The dealers at shows and shops really did not
have much use for basketball cards back then so you could get some neat cards at rock bottom prices.  The item I traded away for a 1956
Topps Mickey Mantle was a complete set of 1957/58 Topps Basketball cards that would all grade as PSA 7 or higher in this day and age.
That set is now unbelievable on the value chart but more important is that it was a neat set with all the greats of the day.  Bob Cousy, Bill
Russel, K.C. Jones, Sam Jones, Bob Petite,  etc. Sometimes you just have to ask yourself, what was I thinking. If I ever win the Lotto, I
will get an entire grade 10 set.

What’s the one thing you own now that you wouldn’t sell for all the money in the world and what’s the story
behind it?
Tough question.  My spouse has never been a big sports fan but she knew that Joe Montana was my all time favorite Quarterbacks. She
got me a framed, autographed Joe Montana jersey authenticated by Upper Deck many years ago for Christmas.  It hangs proudly in my
hobby room and I will not sell it for obvious reasons.

What’s your favorite recent pickup and why?
Several things, actually. Vintage 1948 Leaf Baseball Cards of Spahn and Rizzuto and several 2013 Russell
Wilson PSA 10 and SGC cards.  Spahn and Rizzuto are two of my favorites and I have never owned too many
'48 Leafs before. They are what you might call ugly beautiful.  Sure some interesting designs/background colors.
Russell Wilson because he is hot and one outstanding young man, or at least appears to be. Go Hawks.

What do you have the hardest time with as far as your collection goes?
The hardest time is deciding which direction to go.  I have been collecting for quite a while now and got involved
collecting too many different types of cards. Let’s see. Baseball, NBA Basketball, WNBA Basketball, Football, Hockey, Golf, Boxing, Wrestling,
Tennis, Non-Sport, Pre-War Graded, Post War Graded, Hydroplane Buttons, Hydroplane Patches,  Stamps, Coins and probably other things
that I have put away and forgotten about. Bottom line, I had fun and met some neat people and players in the process. If you are not
having fun, why do it!

Do you have any short or long term collecting goals or do you just buy what you like with no real rhyme
or reason?
I still have want list but at this point, the list is of cards that are so high priced that I will not be getting them any time soon.  Same goes
for my hydroplane collection. I kind of relate to Mark on this question. If I see something that speaks to me, I try and get it if the price is
affordable. For example, I just found a couple Boone (Boom Boom) Kirkman boxing cards on ebay and had to get them and a great Guyle
Fielder hockey card.  Kirkman was a local boxer that fought the likes of George Foreman and Ken Norton to name a few. Fielder was one
of the all time great players for the Seattle Totems Hockey Team.

What’s the best interaction/story you have (if any) about a pro athlete you have met?
I have been a club member since 1977 and our shows became known for the Seattle Center Show.  When Mike Cramer was the President
of the Club, his Pacific Trading Card Company connections must have made a statement to the MLB Agents. Our club started having
autograph guest at our show each year. Over those years, we had some big names. Joe DiMaggio, Al Kaline, Johnny Bench, Enos
Slaughter, Ken Griffey Jr. to name a few.  This included one of the nicest All-Time Greats - my favorite - Stan “The Man” Musial.  Working
the show as a member, I got to talk to all these greats but I must say, my all-time favorite Stan Musial was a thrill to talk with. One of the
nicest guys in sports with Johnny Bench and Harmon Killebrew a close second.  Musial had some great stories and we got to visit with him
for several hours.  Something I will never forget.

What is your favorite sports moment you have witnessed (doesn’t have to be in the flesh)?
Two moments, if you do not mind.  My father and I attended only one sporting event together when I came home from the military. The
second  year of the Sonics, there were two exhibition games that we attended, one right after the other. The first game was the Lakers
versus San Francisco.  We got to see Jerry West,  Wilt Chamberlain, Elgin Baylor (Seattle U.), Mel Counts (Oregon State) and Nate
Thurman live, in person. Wow! I do not even remember who the Sonics played and it did not matter. My dad and I saw the Lakers and
man, were they tall.

The second moment was when I took my son to the Kingdome to see Gaylord Perry win his 300th game.  It was a special moment in time
and I must say, I have never seen a crowd into a game more than this one.  I mean to tell you, there was not much chit chat. Every pitch
was cheered or jeered.  After the victory, we were all given a paper stating that we were there. Still have those papers. Special times!

Through the years, how have your views on your collection and collecting in general changed?
When the card market was hot and the prices went up every other day because of the speculators, it became a hassle to find the cards
that true collectors were after for the sake of collecting. We marched on and let time take care of this. The speculators or investors of that
day have moved on and with the advent of ebay, the collector can find pretty much anything at a reasonable price.  This has been good
for the true collector but not so good if you are trying to sell your duplicates. Slippery slope I guess.  As long as you enjoy this hobby, the
price does not matter at times. Need to get the younger generations interested so this hobby can be passed on.

If you could name just one, what is the hobby subject you would research more if you had the time and why?
Several years ago, I got kind of tired of the post war baseball cards. Pretty much have the cards I want from 1948 through today.  I started
trying to get at least one graded (authenticed) card from the pre war sets. It is unbelievable how many different sets there were. We all
know about the 1887 Allen & Ginter cards and the 1909/11 T206 Tobacco cards but there sure is a great deal more than that.  Sponsors
of Tobacco, Candy, Flour, Clothing, Drug Stores, etc. put out cards.  Gum cards did not come out until the 1930’s.  It is a fascinating subject.
Tinker to Evers to Chance. Just don’t get dizzy in the process. LOL