Our members are as diverse as the collections they build. The Close-Up is published every 4-8
weeks and takes a look at one member's collection as well as the person and stories behind it. 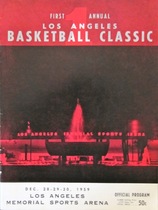 Ray Cardwell
What got you collecting as a kid? What was the hot thing to collect then?
I grew up in a small town in southeastern Washington in a family of four boys. In a small town, you have to
make your own fun, so we played a lot of “sandlot” sports. Fortunately for me, talent wasnʼt a prerequisite.
We also attended a lot of football and basketball games, mainly at Washington State and Idaho ( Idaho was
a member of the Paciﬁc Coast Conference until 1959 ), and Lewiston Bronc baseball games (Western
International and Northwest League). When we went to games, I always got a program. After the Depression
and World War II, almost any consumer discretionary item was a hot item. About the only sport collectables
were baseball and football cards. These were sold in drug stores and only kids bought them, a few packs at
a time. I donʼt remember anyone buying a whole box. There were no guides, and I donʼt think anyone cared
how many total cards there were in a set. I tried to get as many different players as possible, and arranged my cards by teams. Only much
later, did I ﬁnd out that card companies released cards in series. Therefore, we were limited to the series of cards the boxes contained.

What’s the most destructive thing you’ve ever done with/to a collectible?
I once trimmed some 1955 Bowman football cards to make them ﬁt an album I had. Otherwise, even though I was young when I started
collecting, I didnʼt intentionally damage anything.

What’s the one thing you sold or gave away that you really regret and wish you could get back?
When i ﬁnished my education and we bought our house, my parents brought me my sports stuff and stacked the boxes on my porch. When
collectors discovered what I had, they wanted to trade cards with me. Unfortunately, I was still interested in getting as many different players
as possible, and they were interested in my star cards. 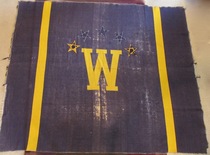 What’s the one thing you own now that you wouldn’t sell for all the money in the
world and what’s the story behind it?
When you put it that way, I might re-consider. I have the letter blanket (which looks more like a towel)
of Howard Cosgrove, the only person from my home town to ever earn an athletic letter in football at the
University of Washington. He lettered as an end in 1900 and 1901. He also lettered three years in track
as a sprinter. His father, Samuel Cosgrove, was the eighth Governor of the State of Washington. Howard,
who was a lawyer, managed his dadʼs campaign. Samuel is the only governor from our county, , although
we also have had such people as a Chief Justice of the state Supreme Court, a Nobel Prize winner, and
at least one Medal of Honor recipient.

What’s your favorite recent pickup and why?
I like to collect St. Louis Browns items, and recently got a program from the 1948 All-Star Game, which was the only
one the Browns hosted. ( The American League won. )

Do you have any short or long term collecting goals or do you just buy what you like with no
real rhyme or reason?
I am an elderly person, so long term collecting is a relative term. I still would like to complete or add to some of my card sets, especially my
1952 Bowman football small and large sets, my 1952 Topps baseball set, and my 1969 Cincinnati Bengal Tresler Comet set. I also am looking
for University of Washington football programs I donʼt have. I collect most categories of sport collectables, so otherwise, I just buy things that I like.

What is/are your "White Whale(s)"?
The “white whales” would be the University of Washington football programs I donʼt have. 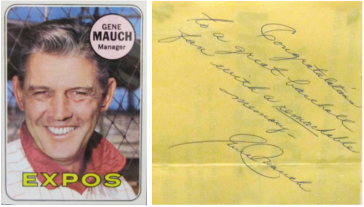 What’s the best interaction/story you have (if any) about a pro
athlete you have met?
I have been fortunate to have had several interactions with pro athletes. When
my wife and I were engaged, our families came to Cincinnati to meet each other.
We were having lunch in a downtown restaurant when the subject came up about
strange things we had seen at sports events. I told a Gene Mauch story that
happened at Sicksʼ Stadium in 1955 or 56. The Rainiers had the bases loaded
against the Los Angeles Angels with the pitcher, Howie Judson, batting. Howie
happened to hit a pop up into short centerﬁeld. At least three people could have
caught it, but through mis-communication, no one did. Gene Mauch, at second
base, was one of these players. He was an aggressive player and was known to
talk and argue a lot. Instead of picking the ball up, one of the outﬁelders hit Mauch
in the jaw, knocking him out cold. While the ball was just lying on the grass, the Rainiers were scurrying around the bases. Judson ended up with a
bases clearing triple. Mauch was taken off the ﬁeld on a stretcher.A few minutes later, someone tapped me on the shoulder and handed me a note
which said “Congratulations to a great baseball fan with a remarkable memory.” It was signed ..... GENE MAUCH! He was sitting by himself having
lunch right behind me. At the time, he was manager of the Montreal Expos. Hoping that I hadnʼt over emphasized the talking and arguing, I went over
to his table and sat down with him for a few minutes. I thought it was the center ﬁelder who hit him ( Gale Wade, who later played for Seattle ), but
he said it was one of the other outﬁelders ( I think he said Bob Speake, but I donʼt remember for sure ). He also told me that someone else attended
that game that wonʼt let him forget it, Ron Santo. Ron Santo attended Franklin High School, that was just beyond the center ﬁeld fence. He then came
over to our table to talk to us. He gave us all tickets to a game in that Reds - Expos series. We sat right next to the home plate side of the Expos
dugout with other people from the Expos organization. Jim McGlothlin ( who once pitched for the Rainiers ) was the starting pitcher for Cincinnati
in that game at Riverfront Stadium.

What is your favorite sports moment you have witnessed (doesn’t have to be in the flesh)?
This yearʼs Super Bowl is as good as any, but otherwise my favorite sports event was going to the 1960 Rose
Bowl between Washington and Wisconsin. My older brother and I got Rose Bowl tickets as a Christmas present.
With our Dad, we drove down to the game, going through Reno, Nevada, on the way. We were at Disneyland
when the Washington band was performing, and before the Rose Bowl, saw the championship game of the Los
Angeles Classic between West Virginia with Jerry West and coach Fred Schaus, and California, which was a
strong defensive team, featuring Darrell Imhoff, coached by Pete Newell. It was a great game, with California
winning. The same two teams with about he same personnel had played for the 1959 National Championship,
which California also won 71 - 70. Much like the Super Bowl, everything went right for the Huskies in the Rose
Bowl, and almost identical to the Seahawks, they won 44 - 8. It was the ﬁrst Rose Bowl that Washington ever
won, and followed the Big Ten winning 12 of the ﬁrst 13 Rose Bowls against Paciﬁc Coast Conference opponents.
On the way home, we also stopped in San Francisco to see the East - West Game at Kezar Stadium.
Through the years, how have your views on your collection and collecting in general changed?
I initially collected cards and tried to complete sets. However, when the guides came out in the late 1970s, prices rapidly increased. Fortunately,
I already had most of the cards I wanted, and I started collecting other things that were cheaper and more available. I collect for memory value
more than money value.

If you could name just one, what is the hobby subject you would research more if you had the time and why?
I have published some things, but mainly enjoy researching topics. Sometimes my books are just in my head. One of these that I have been
working on for many years is the history of Lewiston Bronc baseball. I have interviewed a lot of people connected with the Broncs, and have
a lot of great memories myself. Now that I am retired, I hope to some day complete that project.